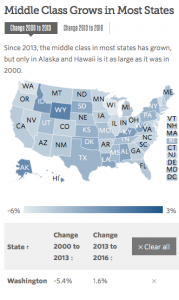 It’s been a long, slow slog for middle class economic recovery. Although the trends are finally headed in the right direction, the recovery is far from complete. That’s the conclusion in a new report from Pew Charitable Trusts.

Only Alaska and Hawaii had a larger share of middle-class households in 2016 than in 2000 — and in both cases, the increase was just two-tenths of a percentage point, to about 55 percent. Alaska and Hawaii are the two states with the lowest concentration of wealth in the top 1 percent, according to a 2015 study by economist Mark Frank at Sam Houston State University in Texas.

Most states did see an expanding middle class between 2013 and 2016, though in all but three — Montana, Connecticut and Georgia — the increase was smaller than 2 percentage points. In Montana, the share of middle-class households grew by nearly 3 percentage points, from 51 percent in 2013 to 54 percent in 2016. In 2000, 55 percent of Montana households were middle class.

The data for Washington show that the middle class has still not caught up to where things stood at the turn of the century.

The share of the middle class in 2013 was below where it stood in 2000. And inflation-adusted median income was lower. Although, as shown in the data table below the map, the middle-class share grew 1.6 percent from 2013-2016.