The Tax Foundation reviews IRS data on who pays the federal income tax. Again, the federal tax structure is found to be highly progressive.

This week the Internal Revenue Service published its early release data on individual income tax rates and shares for 2017. The release is timely given the current debate on the distribution of taxes in the United States…

The distribution is shown in the chart below. 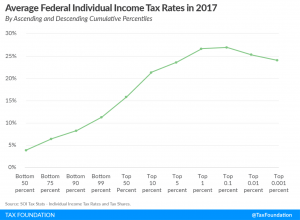 Read the short TF post for more detail, including limitations of the data and the likely impact of the 2017 tax law, which “will likely show a drop in average taxes rates across all income levels, but a somewhat larger drop for the highest-income earners.”

In March we wrote about another TF analysis, demonstrating how the income tax burden has grown more progressive over time.

The national tax debate mentioned by the Tax Foundation will be playing out as well in Olympia next year. A preview of the discussion took place in September at the AWB Policy Summit.

Earlier we have reported on how the progressivity of the federal income tax offsets the regressivity of most state and local tax structures, a point emphasized in a comprehensive Washington Research Council analysis.

3. All state and local tax structures are regressive. But when the steeply progressive federal income tax system is considered, the overall federal-state-local tax burden is progressive in Washington and every other state, and the differences among the states represent smaller proportions of households’ tax burdens.

Also relevant to the discussion is the role played by federal funding that flows through state government.

Tax policy is best understood in context. And, in context, the federal-state-local tax burden in Washington is progressive.