Washington Research Council economist Kriss Sjoblom has updated his recent analysis of national data on savings, personal consumption, and personal income. We commented on his earlier work here. Noting the increase in savings over the summer, we concluded,

Perhaps that elevated savings rate can help carry spending forward for a while.

It seems that the UI system and extraordinary federal aid achieved the goal of sustaining households through what we hope has been the worst part of the pandemic. The assistance also maintained a higher level of consumer spending than may have been anticipated in the gloomier government revenue forecasts. Something to watch.

Sjoblom’s latest post shows that, despite the expiration of the $600 federal UI assistance, the summer savings increase did sustain personal consumption.

The saving rate jumped from 8.3 percent in February to an astounding 33.7 percent in April and then declined to a still quite high 14.1 percent in August. It was the 3.6 percent decline in the saving rate from July to August that allowed consumption expenditures to rise while personal income fell.

Sjoblom has produced a useful chart showing the shift in sources of personal income over time. Notice the increased role of government programs, particularly in the early months of the pandemic, and the recent rise in employee compensation as the economy reopened. See also the increase in spending after the deep decline in March and April. 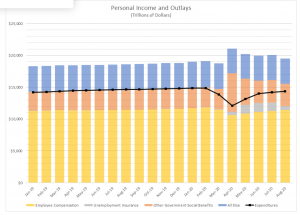 Also on the first chart, the black line shows monthly personal consumption expenditures. Again these numbers are seasonally adjusted annual rates. Consumption expenditures in August 2020 were 3.4 per cent lower than in the preceding February, despite the 2.0 percent increase in personal income over this period; expenditures in August were 1.0 per cent greater than in July, despite the 2.7 percent decrease in personal income over the subperiod.

The programs did work as intended. Sustainability in the coming months will, we imagine, depend on the path of the pandemic and whether Congress agrees to extend another relief package.