Education Next has released its 2018 EdNext poll. The poll essay (lengthy) provides a lot of interesting detail. Some of the “key finding” identified by the analysts (edited for brevity and to highlight some issues particularly relevant to discussions in our state; we recommend reading the whole list):

1. Teacher salaries. Among those provided with information on average teacher salaries prevailing in their state, 49% of the public say the pay should increase—a 13-percentage-point jump over the share who said so last year…

2. School spending. Among those provided information about current spending levels in their local school districts, 47% say that spending should increase, an increase of 7 percentage points over the prior year.

3. Agency fees. In June 2018, the Supreme Court reached a decision favored by majorities of the public and of teachers when it ruled that states could not allow public-employee unions to impose agency fees to cover collective-bargaining costs on workers who do not join unions. No less than 56% of the general public and 56% of public-school teachers oppose laws that require “all teachers” to “pay fees for union representation even if they choose not to join the union.” Only 25% of the public and 34% of teachers favor agency fees…

6. Charter schools. After a substantial decline in support in 2017, public backing for charter schools climbed by 5 percentage points this past year, to 44%, with only 35% opposed. The uptick is concentrated almost entirely among Republicans, widening the divide between Republicans and Democrats on this issue.

7. Common Core. After falling in previous years, opinion on the Common Core State Standards has now stabilized at 45% in support and 38% opposed. The Common Core brand remains weak, however. When half of the respondents are asked instead about using standards that are “the same across the states,” the favorable response is 16 percentage points higher than when the name Common Core is used.

Education Next also provides links to interactive graphics and poll trends. Below is an example, showing how various groups grade public schools. 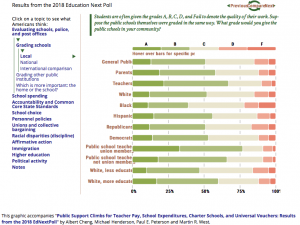 In covering the poll, the Associated Press writes,

Forty-four percent of respondents in the poll conducted in May said they support the expansion of charter schools, compared to 39 percent in 2017. The gain of 5 percentage points, however, did not fully offset the drop in support from 51 percent in 2016.

“I hate to see an issue turn into a partisan question,” said Robin Lake, director of the Center on Reinventing Public Education. “I don’t think that an education policy that’s designed to get better outcomes for kids should ever be a partisan issue.”

“It makes sense that only 50 percent of Americans are giving their public school a good grade of an A or a B that they would express support for alternatives to those public schools,” said Patrick McGuinn, a professor of political science and education at Drew University.

There’s a lot of good information in the poll, plenty of fuel for upcoming policy discussions.