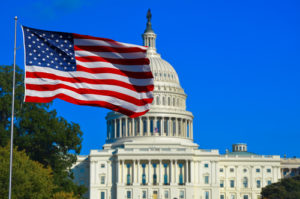 Among those watching most closely President Trump’s first address to Congress these evening  will be the nation’s governors and state legislators. The new administration and Congressional leadership are promising sweeping changes in state-federal relations. Among the issues of concern to many state budgets are changes in Medicaid, health care and tax policy.

Earlier, we mentioned the growing costs of Medicaid associated with policy changes over the years. The Associated Press recently wrote of a report speculating that federal changes in health care law will reduce funds flowing to the states.

A report by the consulting firms Avalere Health and McKinsey & Company concluded that the changes under consideration by the GOP-led House would reduce significantly federal dollars for Medicaid and subsidized private insurance.

So far, the reaction to Medicaid reform seems divided at the state level along partisan lines.

Tensions emerged Saturday between Democratic and Republican U.S. governors over a GOP-led proposal for a major overhaul to Medicaid, with Democrats saying the changes would take away people’s health coverage to finance tax cuts for the wealthy.

GOP governors intend to present Congress with a plan that they say would give states more flexibility to administer health coverage for poorer residents while protecting states from absorbing the costs of repealing the Affordable Care Act.

That’s about what we’d expect, but implementation of any changes will be driven by D.C. politics, reminding all parties in the federal-state partnership just who exactly is the senior partner. Spoiler: It’s not someone sitting in a state capitol. And, as the Associated Press reports, though both Congressional and state government leaders are impatient, details are still few:

Republicans in Congress are getting impatient for more detail on Trump’s plans to repeal and replace the Affordable Care Act and to undertake sweeping tax changes. Trump on Monday called the health care law a “complicated issue” and promised to give states “the flexibility they need to make the end result really, really good for them.” The speech is a prime opportunity for Trump to go beyond such generalities, but aides say not to expect a “legislative walkthrough.”

Governors of both parties added still more confusion Monday when they called for any replacement to cover all the people already benefiting from the landmark law.

“Of course I am concerned,” said Gov. Brian Sandoval, the Republican governor of Nevada, where about 300,000 people have gained Medicaid coverage. “I am someone who elected to expand Medicaid. That’s been very beneficial to my state, and I want to be sure those individuals can keep their coverage.”

State revenue streams are also affected by federal tax policy, so state officials are scrutinizing proposed GOP tax reforms. We previously noted proposals to eliminate the federal deduction for state and local taxes, a proposal that affects high-tax states more than others.

Eliminating the deduction would boost the federal treasury by almost $1.3 trillion over a decade, according to a study by the Tax Policy Center, a joint think tank of the progressive Urban Institute and the moderate Brookings Institution. Limiting the deduction claimed by tax filers would raise less revenue, depending on the size of the cap.

And then there’s the marijuana tax. The Seattle Times editorial board urges the Trump administration to “chill out.”

Legalization done right — as Washington has — limits youth access; regulates seed-to-sale production; and taxes, rather than criminalizes, adult recreational use. Washington projects $730 million in cannabis tax revenue for the next two-year budget, and spends it on prevention, treatment, health care and schools. (emphasis added)

As we said earlier, interesting days are ahead in federalism and fiscal politics.