That sums it up. He goes on,

An overwhelming number don’t like the idea of tolling downtown Seattle, to try to address traffic congestion. Most don’t want to add more variably-priced freeway lanes, like on Interstate 405. And a big chunk of people think that the main effect of tolls is penalizing drivers who can’t afford to pay.

Gutman’s reviewing an Elway Poll sponsored by the Seattle Times. Click through for more detail. The tolling numbers are overwhelming: 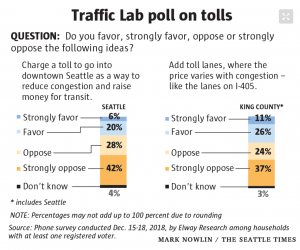 In a separate story on the poll, Gutman reports,

Big majorities of both Seattle and King County residents:

Congestion is a big concern.

And what’s to blame [for increased congestion]? The biggest culprit, according to respondents, is the number of people moving to the area, followed by poor planning by government agencies and insufficient public transportation. Only 8 percent of respondents said lack of improvements to roads and highways was the biggest cause of traffic woes.

Last April, we wrote about Seattle Mayor Jenny Durkan’s interest in tolling city streets. From the Times’ story on tolling,

Seattle Mayor Jenny Durkan announced last year that the city will develop a plan to toll city roadways, part of its efforts to reduce traffic congestion and greenhouse-gas emissions.

Such a plan remains only in the research stages, and Durkan has said little publicly about it since her announcement nine months ago. The last two city budgets have included a total of $1.2 million to study the idea. Tolling city streets would almost certainly require the approval of either the state Legislature or Seattle voters.

At the moment, voter approval looks like a heavy lift.