The report, the third of three installments, synthesizes 39 indicators that capture a range of school finance, academic achievement, and socioeconomic factors that affect the quality of state school systems.

Overall, the nation gets a C. Washington gets a C+. The “most improved” post relatively unimpressive marks, as the chart below shows. 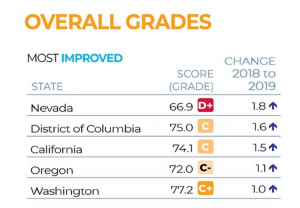 Washington’s score of 77.2 compares with a national score of 75.6; so, C+ rather than C. Nationally,

The national score of 75.6 represents an increase of 0.5 points over last year, when the nation also earned a C on the summative report card. The slight uptick in the numerical score reflects modest gains in each of the three report card categories. But the result also continues a trend of mediocre performance, with large disparities between high- and low-scoring states.

The top and bottom performers: 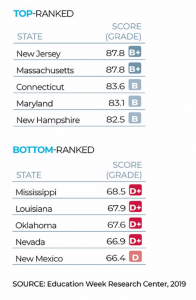 New Jersey’s first-place position with a B-plus and a score of 87.8 ends Massachusetts’ four-year reign atop the Quality Counts rankings, in which Massachusetts also earned a B-plus. Massachusetts fell short of the top spot by just a few hundredths of a point on the combined scores.

Massachusetts has topped our Opportunity Washington Achieve priority in recent years. Most recently, we wrote,

Massachusetts holds on to its 1st place position. The Bay State outperforms Washington on the K-12 measures as well production of bachelor’s and advanced degrees per capita. Washington beats Massachusetts in associate’s degrees awarded per capita.

For more on the Quality Counts 2019 report card see the full report.