The search for employees continues apace. The U.S. Bureau of Labor Statistics reports that there were 11.3 million open jobs at the end of January.

The AP report on the story adds inflation context.

U.S. businesses posted a near-record level of open jobs in January, a trend that has pushed up worker’s pay and added to inflationary pressures in the U.S.

Employers posted 11.3 million jobs at the end of January, down slightly from a record of 11.4 million in December, the Labor Department said Wednesday.

The number of people quitting their jobs slipped but also remained far above pre-pandemic levels as more Americans take advantage of numerous opportunities to switch jobs, often for higher pay. The vast majority of those quitting do so to take another position.

The BLS also has a chart that shows how many unemployed people there are for each open position. As the graphic shows, it’s has dropped sharply since the pandemic high: to 0.6 from an April 2020 high of 4.9. 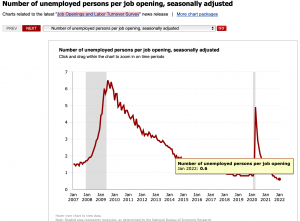