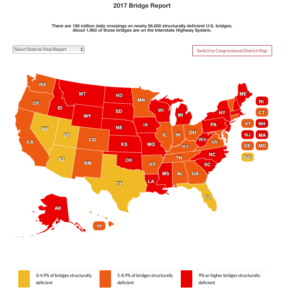 According to the ARTBA press release,

More on the report in USA Today.

Policymakers in Washington in 2015 adopted a comprehensive transportation package to make necessary improvements in the state’s transportation infrastructure, including bridges. As our Connect report shows, we have a ways to go yet. The ARTBA report confirms the wisdom of state leaders in acting to provide the funding necessary to begin making progress.