The Washington Roundtable has released a new report that closely examines the different regional economies that make up our state. It sheds important new light on the urban-rural divide that we’ve written about many times on this site.

The report, “Unlocking Washington’s Full Potential,” by the Roundtable and Boston Consulting Group acknowledges the state’s overall economic prosperity, then looks below the surface.

…[Washington] is a top-five state for per-capita income growth and ranks among the top 10 states for job growth. At current momentum, BCG estimates that our state will produce 1.4 million jobs over the next decade. However, the statewide data masks a complex regional narrative in which prosperity is spread unevenly, and communities are outright struggling.

The analysis divides the state into six regions. As the map below shows, economic and job growth have been largely concentrated in the Puget Sound corridor. 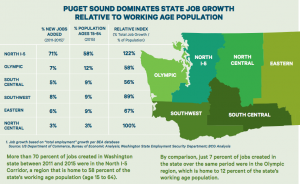 The research identifies the benefits of expanding opportunities statewide.

At its current growth rate, Washington is projected to produce 1.4 million new jobs over the next decade. To become a top-five state for job growth, Washington must create 250,000 jobs, in addition to those already projected, by 2027. The state can realize 120,000, or nearly half, of the additional jobs needed to reach the top-five goal by raising economic performance in regions outside the North I-5 Corridor up to the state’s average growth rate. To do that, key challenges in five areas must be addressed: human capital, infrastructure, innovation ecosystem, trade and investment, and regulation.

The brief and highly-readable report makes identifies strengths and challenges in each of the six regions and makes specific recommendations to policymakers for “unlocking the potential.” It’s a valuable contribution to efforts to bridge the urban-rural divide and promote economic vitality in every corner of our state.

We commend it to your attention.