The 2017 Distressed Communities Index produced by the Economic Innovation Group takes a deep look at economic disparities across the nation. On most measures, Washington looks pretty good, although the state – as we’ve written often – contains an urban-rural divide.

In total, 52.3 million individuals live in economically distressed zip codes— meaning the zip codes that fall into the worst-performing quintile on the DCI. That equates to one in six Americans, or 17 percent of the U.S. population. Such communities can be found in every region of the country and in rural areas, suburbs, and city centers…

The data show Washington among the least distressed states, with just 6.1 percent of the population living in distressed zip codes. 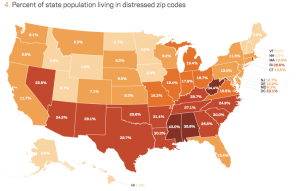 America’s elite zip codes are home to a spectacular degree of growth and prosperity—hubs of innovation and progress seemingly immune to the concerns over automation, globalization, or lack of upward mobility that pervade national headlines. However, outside of those top communities, economic well- being is often tenuous at best. And, at worst, millions of Americans are stuck in places where what little economic stability exists is quickly eroding beneath their feet.

Unsurprisingly, as the map below shows, Seattle remains in elite company: 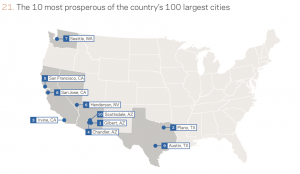 In the Seattle Times, Jon Talton reports on the DCI.

Indeed, Seattle comes out even better among actual peers. After San Francisco, it is No. 2 among real cities on the top 10 most prosperous list, which also includes Austin and San Jose. Otherwise, the leaders are high-end suburbs, such as Gilbert, Ariz., and Plano, Texas.

Only 2.2 percent of Seattle’s population lives in distressed ZIP codes. Nearly 53 percent live in prosperous ones. On inequality, Seattle ranks 45 out of 100 cities.

There’s a wealth of data in the report, including some useful interactive features. After pointing out that it “is fair to wonder whether a recovery that excludes tens of millions of Americans and thousands of communities deserves to be called a recovery at all,” the report concludes optimistically.

Fortunately, hard work, ingenuity, and entrepreneurial energy can be found in every community across the country. Policymakers should focus on empowering those forces in order to rekindle the grassroots economic growth that made this country the world’s leading economy in the first place.

Makes sense to us.