As the COVID recession led to high and persistent unemployment rates that drained the state unemployment insurance trust fund, the prospect of a steep hike in UI taxes became a major employer concern. State government, business and labor representatives considered ways to mitigate the impending tax increases. Editorial writers called on the state to act to reduce the anticipated increase. And Gov. Inslee has proposed some UI tax relief.

The Washington Research Council has published a new policy brief examining the UI tax dynamics. Unemployment Insurance Taxes Will Be a Headwind for the State Economy makes clear why it’s critical that lawmakers this session ease the projected UI tax burden on employers.

Unemployment insurance (UI) tax rates are adjusted annually and under current law will be much higher this year due to the COVID-19 pandemic. According to the U.S. Department of Labor, for Washington state, regular benefits paid under the regular state UI program totaled $3.36 billion from April to Sep- tember 2020, a dramatic increase from the $429 million paid out in the corresponding months of 2019 (DOL, see Chart 1). The state UI trust fund began 2020 with a balance of $4.99 billion. It was forecasted to end 2020 with a balance of just $1.37 billion. The forecasted balance at the end of 2021 under current law is $566 million (ESD 2021).

Because of the automatic adjustment of UI payroll tax rates, the amount of UI tax paid by Washington businesses is expected to increase dramatically, from $1.12 billion in 2020, to $2.11 billion in 2021, and then to $2.99 billion in 2022. This rising UI tax burden will be a significant headwind to the recovery of the state economy.

The WRC report is short and clear, breaking down the components of the UI tax calculation. The bottom line impact under current law is shown dramatically in the graph below. 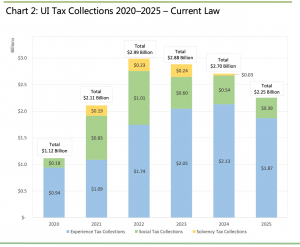 The WRC also analyzes the Inslee proposal. We’ll quote liberally here, rather than attempt to paraphrase.

Experience tax. Benefits paid between March 22 and May 2, 2020 (the period of Gov. Inslee’s Stay Home, Stay Healthy order) would be excluded from the calculation of firms’ benefit ratios. Beginning next year, employer benefit ratios would be calculated by dividing total benefits charged to the employer’s account by the employer’s taxable wages over a 60-month period instead of the current 48-month period. (For taxes on wages paid in 2022, the benefit-ratio period would be July 1, 2016 to June 30, 2021.)

Minimum weekly benefit amount. Under current law, the minimum weekly benefit amount is 15% of the average weekly wage. As a result, Washington’s current minimum is the highest in the nation (ESD 2020b). Gov. Inslee proposes raising the minimum to 20% of the average weekly wage beginning on July 1, 2021. This would raise the projected minimum benefit in July from $201 to $270. Over time, higher benefit payouts would push some businesses into higher rate classes, increasing the amount of tax they pay.

The WRC also shows the tax impact of his proposal.

UI tax payments are forecasted to be lower in each year from 2021 to 2024 under the gover- nor’s proposal than they would be under current law. The tax savings in 2021 would be $790 million; over the four years the savings would total $2.50 billion. However, under the governor’s proposal, 2025 tax payments would be $537 million higher than under current law and $1.297 billion higher than the amount paid in 2020.

The forecasted December 31, 2025 ending balance for the UI trust fund is $2.834 billion under the gover- nor’s proposal, compared to $5.848 billion under current law. The reduction in trust fund balance id the sum of three parts: Under the governor’s proposal, tax revenues received would be $1.963 billion lower, benefits paid would be $804 million higher and interest earned on reserves would be $257 million lower than would be the case under current law.

ESD’s forecasting model does not presently extend beyond 2025. It is certain, however, that taxes in 2026 and later years would remain higher under the governor’s bill than under current law until the trust fund is replenished.

Under current law, businesses’ UI tax burden will increase dramatically over the next two years. This will be a headwind to the recovery of the state economy. Increasing rates on other existing business taxes or adding a new business tax would only compound the problem.

Under current projections, the balance in the UI trust fund at the end of 2025 will be $859 million more than the balance at the beginning of this year. It should be possible to provide some relief to businesses by restraining the near-term increase in UI rates.

Right. Expect more on this as the session continues.