The Tax Foundation has examined new IRS income tax data. The brief report is worth your time. 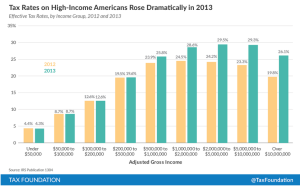 2013 was a year of many changes to the U.S. tax code, and some of the most significant changes were targeted at raising taxes on high-income Americans. The fiscal cliff tax deal created a new 39.6 percent income tax bracket, raised the top rate on capital gains to 20 percent, and imposed a limitation on itemized deductions for high income Americans. Meanwhile, the Affordable Care Act’s new 3.8 percent Net Investment Income Tax went into effect at the beginning of 2013.

The tax burden stayed relatively stable for most taxpayers.

For the highest-income taxpayers, rates spiked by even greater amounts.

The Tax Foundation takes a closer look at the effect of increasing the capital gains tax rate. 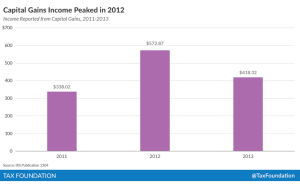 What accounts for the decline in 2013?

As the graph above shows, capital gains income spiked between 2011 and 2012, largely because Americans wanted to realize as many gains as possible before top tax rates on capital gains increased to 20 percent in 2013. Now, the newest IRS data reveals that, between 2012 and 2013, total income from capital gains fell significantly, from $572 billion to $418 billion.

Which is pretty much what you would expect. But still interesting to see documented. And relevant to discussions here as lawmakers consider a new state capital gains tax.