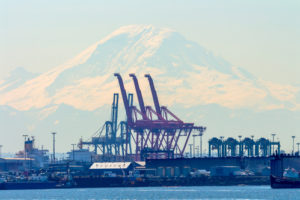 As of 2015, the latest year for which deep-dive data are available, maritime directly employed 69,500 people, many in high-paid jobs. That was 2.2 percent of all jobs in the state. Another 191,100 jobs were indirectly supported by maritime.

Maritime remains highly important to the state, region and Seattle, not only in its own right but to maintain a diversified economy. Many of the jobs pay well for skills that can be acquired in community colleges and union apprenticeship programs.

More detail from the report:

In 2015, Washington’s Maritime Sector supported 69,500 direct jobs. Factoring in upstream support chain transactions (indirect effects) and maritime-related income expenditures (induced effects), the industry supported an additional 121,600 jobs elsewhere in the state economy; for every direct job in maritime, an additional 1.8 jobs were supported through secondary impacts. At the same time, every direct dollar in wages was associated with an additional $1.1 in wages elsewhere in Washington. Maritime Sector activities also supported, through multiplier effects, $37.8 billion business revenues across Washington. For every million dollars in industry revenue, the sector supported a total of 11 jobs throughout the state economy.

As Talton reports, the sector is often overlooked or taken for granted. It should not be.