  Summing the changes to the GF-S, ELTA, OPA and WEIA forecasts, total state revenue subject to the budget outlook process is expected to increase by $898 million in the 2021-23 biennium and $965 million in the 2023-25 biennium.

Budget reports from legislative fiscal committees typically roll up four accounts: the general fund–state, the education legacy trust account, the Washington opportunity pathways account and the workforce education investment account. Budgeteers refer to the roll-up as “funds subject to the outlook” (NGFO). Under the four-year balanced budget requirement, positive ending balances are required for both the current and the following bienniums for the NGFO overall.

It’s a lot of money, as the following chart shows. 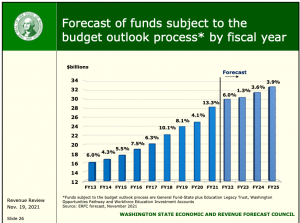 An upward adjustment of some sort was expected following the string of collections reports showing revenues coming in ahead of forecast. The ERFC writes,

Republican legislative members of the Economic and Revenue Forecast Council said in response to the strong growth, tax cuts should be part of any final plan. Democratic budget writers said nothing is off the table but expressed caution.

Rep. Timm Ormsby, D-Spokane, a member of the council and the chief budget writer for the House, noted last year the state was looking at potential shortfalls in the billions and said the latest forecast “provides me with relief more than optimism.”

“This is a pretty volatile time,” he said. “I believe that it requires caution not exuberance.”

This is the forecast on which the governor will base his supplemental budget proposal, which will be released next month.