The Economic and Revenue Forecast Council met yesterday for an economic review prior to releasing its economic forecast. This is all in preparation for the revenue forecast that will be released November 20 and will frame the governor’s supplemental budget request. As always, there’s a lot of information in the meeting materials. Here’s what we found most interesting.

This is all consistent with the ERFC forecasts for the past year, including the most recent economic and revenue update: slower growth and caution because of the elevated risks of trade conflicts and global political and economic uncertainty.

At MyNorthwest, Nick Bowman reports that the review has prompted some talk of recession risk.

A new report says there’s a chance Washington is headed for a recession sometime in the next year.

The report comes from the Washington State Economic and Revenue Forecast Council, calling for a 34.8 percent chance of a recession over the next 12 months. As SCC Insight’s Kevin Schofield points out, that’s “approximately the same level as before the 2007 recession.”

The 34.8 percent chance comes from one of two Federal Reserve charts included in the report. Here they are. The top one, the New York Fed, has the elevated recession probability; the second, from Philadelphia, does not. 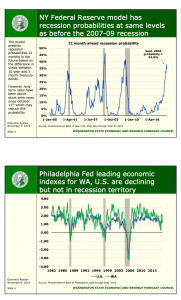 As we’ve pointed out before, economists are bad at predicting recessions. So, sure, there’s a chance. There are plenty of reasons to be concerned: A decline in small business optimism, many business economists anticipate a recession by the end of 2021, CEO confidence is at the lowest level in a decade.

Bowman adds a list drawn from the ERFC report:

The state Revenue Forecast Council’s own report lists a handful of factors that could contribute to a recession in the near future. Among those factors:

So, when exactly can we expect this potential recession to hit? For Gardner, it’s a date that he’s had circled in his calendar for years now.

“Back in early 2018, I said by the end of 2020,” he predicted. “People were laughing at me back then, [saying] that I was just a stupid idiot English economist — now they’ve come around to it.”

Again, so far that recession expectation is not part of the state’s forecast. But as we wrote last month, caution flags are waving.

While some analysts find that the Washington budget might weather a recession better than most states, that finding assumes no fiscal missteps by lawmakers. A month ago, we wrote,

The sustainability of the state budget is apt to be tested in the coming months. Although Washington may be in better shape than most states – possibly a weak reference point – we continue to warn of the dangers of overreach at a time of significant economic uncertainty