A few weeks ago we examined the proposition that “transportation network companies” (TNCs, the new jargon for ride-share services like Lyft and Uber) posed a threat to mass transit. So we were intrigued by a new report documenting successful partnerships between TNCs and public transit agencies.

One of the authors writes about their research in New Geography.

Facing growing pressure to try new things, many transit agencies and municipal governments are experimenting with strategies that involve ridesharing. Our new study, Partners in Transit: A Review of Partnerships between Transportation Network Companies and Public Agencies, describes more than two dozen partnerships around the country designed to allow transit operators and TNCs (predominately Lyft and Uber) to concentrate on what they do best. TNCs fill gaps, offer “first- and last-mile” solutions, and augment service to those with mobility challenges, while transit providers direct resources to modernizing top-performing routes, serving commuters, and other core strengths.

The idea behind many partnerships is that a properly designed program can be less expensive than buying buses and paying for labor, fuel, and maintenance on lightly used routes. They also give public bodies experience with emerging technologies and can boost the public image of transit, not to mention get travelers to their destination faster. The pace at which partnerships are emerging across the country deserves far more attention than it has received.

The map below identifies the partnerships examined, including one in Tacoma. 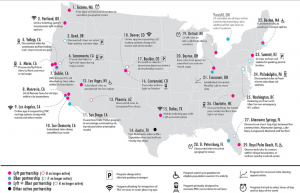 Such experiments can be challenging.

Still, both large and small agencies are testing the waters: 11 of the 50 largest transit agencies in the United States have experimented with some form of partnership.

What comes next? Being able to pay for both rideshares and transit – and connections between the two – on a single app. Up until now, customers must buy pay two fares when making ridesharing/transit connections. This inconvenience will end once sensitive issues such as protecting private information and technological hurdles can be crossed.

Considering the speed at which ridesharing is growing, more agencies will likely reach out to Lyft, Uber and other providers to test out new strategies in the next couple years.