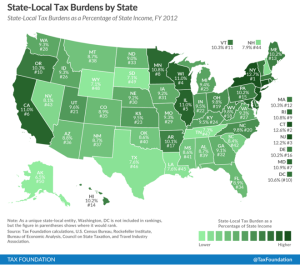 Because the Tax Foundation adjusts the data to reflect tax incidence, their calculations differ from the usual government reports of tax burden. TF explains:

Because tax collections represent a tally of tax payments made to state and local governments, they measure legal incidence only. In contrast, our tax burdens estimates use a geographical incidence model to allocate taxes to states that are economically affected by them. As a result, the estimates in this report attempt to measure the economic incidence of taxes, not the legal incidence.

Tax collections are useful for some purposes and cited frequently. However, dividing total taxes collected by governments in a state by the state’s total income is not an accurate measure of the tax burden on a state’s residents as a whole because it does not accurately reflect the taxes that are actually paid out of that state’s income.

The authoritative source for state and local tax collections data is the Census Bureau’s State and Local Government Finance division.

And, as the Tax Foundation makes clear, the rankings are remarkably close together.

Since we present tax burdens as a share of income as a relative ranking of the 50 states, slight changes in taxes or income can translate into seemingly dramatic shifts in rank. For example, the 20 mid-ranked states, ranging from Delaware (16th) to Colorado (35th), only differ in burden by just over one percentage point.

The tax levels, as measured by TF and the Census Bureau, provide useful information, but are only part of the story. The distribution of the tax burden is another critical issue. The Washington Research Council has a good podcast on the level of business taxation in our state. As we reported last fall, business taxes in Washington are relatively high.

Tax policy is likely to feature prominently in the legislative session and the coming campaign. We’ll do our best to help keep the numbers straight and in context.