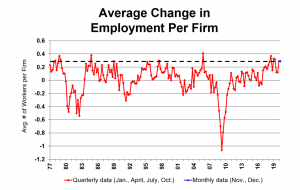 The 2019 small business labor market ended in much the same way as it began with strong hiring, elevated levels of open positions, and higher employee compensation. Job creation did not change from November, with an average addition of 0.29 workers per firm, the highest level since May. Net job creation had faded from February’s 0.52 workers per firm to September’s 0.10, but is back in strong territory. Finding qualified workers remains the top issue for 23 percent reporting this as their number one problem, 4 points below August’s record high. Eleven percent (down 1 point) reported increasing employment an average of 2.0 workers per firm and 4 percent (down 1 point) reported reducing employment an average of 2.3 workers per firm (seasonally adjusted).

Attempting to fill open positions, historically high percentages of owners plan to raise worker compensation. Seasonally adjusted, a net 29 percent reported raising compensation (down 1 point) and a net 24 percent plan to do so in the coming months, down 2 points. Seven percent cited labor costs as their top problem. Labor shortages continue to slow economic growth in critical sectors like construction, manufacturing, and transportation. But even so, the economy is doing well given the labor constraints it faces. The economy continues to grow around a 2 percent pace. Unemployment and inflation are exceptionally low, and incomes are rising – that’s a good economy.

In the accompanying press release, the group’s top economist comments,

“The inability to assemble work teams is a key contributor to the comparably lackluster performance of the construction industry as evidenced by the December figures,” said NFIB’s Chief Economist Bill Dunkelberg. “Owners are raising compensation in order to attract more qualified applicants to fill open positions.”

Earlier, we reported that recession fears top the list of external concerns for top business executives. There are no guarantees that the strong economic performance of 2019, for small and large business alike, will continue through a likely turbulent 2020. Nonetheless, the NFIB report adds a healthy note of optimism as the year begins.