In recent months, we’ve written plenty about soaring unfilled job openings, in Washington and nationally. A month ago we quoted Kris Johnson, president of the Association of Washington Business. He wrote,

In nearly every community, “Help Wanted” signs are common in store windows and more employers across more industries are offering signing bonuses today than we’ve ever seen.

Compared to the challenges we faced a year ago, it’s a good problem to have. But unless something is done to address the escalating workforce crisis, it will be a drag on long-term economic recovery.

A lack of skilled and qualified workers was a big issue for many employers prior to the pandemic. The pandemic has exposed and magnified the issue, as it has so many others.

Since then, the labor shortage has intensified, as confirmed in today’s Jobs Report from NFIB.

Overall, 61% of owners reported hiring or trying to hire in July, up two points from June. A seasonally adjusted net 27% of owners are planning to create new jobs in the next three months, down one point from June’s record high reading.

Finding qualified workers remains a problem for small business owners. Ninety-three percent of those owners hiring or trying to hire reported few or no “qualified” applicants for the positions they were trying to fill in July. Thirty-one percent of owners reported few qualified applicants for their open positions (down one point) and 26% reported none (up two points), a 48-year record high.

The graph below shows the cyclicality of the problem, as well as the new peak. (More charts here.) 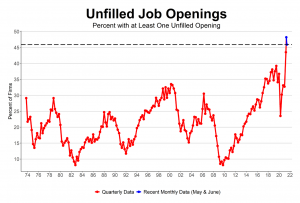 While these are national data, Washington faces same challenges.