Fifty percent of all small business owners reported job openings they could not fill in the current period, a record high reading according to NFIB’s monthly jobs report. The number of unfilled job openings has remained far above the 48-year historical average of 22%.

“Small employers are struggling to fill open positions and find qualified workers resulting in record high levels of owners raising compensation,” said NFIB Chief Economist Bill Dunkelberg. “Owners are raising compensation in an attempt to attract workers and these costs are being passed on to consumers through price hikes for goods and services, creating inflation pressures.”

The chart below tells the story. 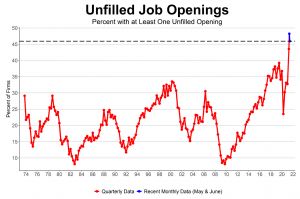 While increased compensation may help, it only works if qualified workers are available.  Employers say they cannot find employees with the requisite skills.

Finding qualified employees remains a problem. Fifty-six percent (89 percent of those hiring or trying to hire) of owners reported few or no “qualified” applicants for the positions they were trying to fill in June (down 1 point). Recent strength in the goods producing sector has increased the number of jobs available relative to the hospitality sector which is lagging in the recovery.

Where there are open positions, labor quality remains a significant problem. Thirty-two percent of owners reported few qualified applicants for their open positions (unchanged) and 24 percent reported none (down 1 point). That said, total employment remains about 8 million below the 2020 peak, people who had a job then but are now, temporarily or permanently on the sidelines.

Much more detail in the survey.