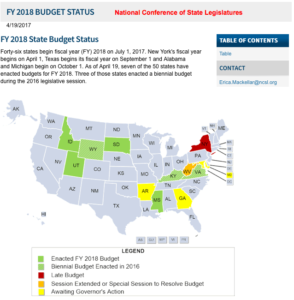 Let’s be clear: We would welcome an agreed-upon biennial state budget and a swift end to the special session. We wondered, though, how many states were still wrestling with their budgets. The map above, from the National Conference of State Legislatures, is slightly out of date – it reflects budget status as of April 19 – but is close enough for our purposes.

Forty-six states begin fiscal year (FY) 2018 on July 1, 2017. New York’s fiscal year begins on April 1, Texas begins its fiscal year on September 1 and Alabama and Michigan begin on October 1. As of April 19, seven of the 50 states have enacted budgets for FY 2018. Three of those states enacted a biennial budget during the 2016 legislative session.

The report shows Washington as still being in regular session; we’re, of course, now in special session, the seventh overtime in eight years. Another update: A special session has just been called for West Virginia.