While Washington is in many ways exceptional, its political profile this year is in keeping with that of most states. Across the country, reports Governing magazine, one party controls both houses of the Legislature and the governor’s office. 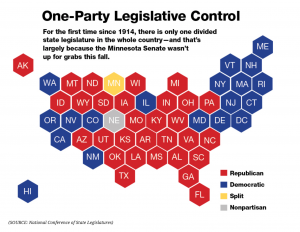 Governing staff writer Alan Greenblatt points out the extent of the single-party legislatures.

All over the country, chambers that once were up for grabs are now firmly controlled by one party holding what resembles an open-ended lease. There are exceptions, but in most states, either Democrats or Republicans have held power for years and are unlikely to give it up anytime soon. “There are only two split legislatures in the entire country — Congress and Minnesota,” says Matt Walter, president of the Republican State Leadership Committee. “Everyone else lives in a state that is either red or blue.”

The single-party control extends beyond the legislatures.

In three-quarters of the states, the same party controls both the legislature and the governor’s office.

Greenblatt sees a demographic dimension that’s familiar to us.

In American state politics these days, power results not from a contest of ideas, but rather from demographic identities. The country is divided along various, often overlapping lines, including race, age, gender, religious attendance and, increasingly, education levels. These various subgroups of Americans are increasingly sorted into separate geographic areas, a reality reflected in legislative results.

Last November we wrote that the mid-term elections confirmed the urban-rural divide in our state, mirroring the national trend. And a year ago, we reported that the urban-rural tensions were manifesting themselves in legislation in many (primarily red) states that attempted to limit cities (primarily blue) from enacting progressive legislation.

The Governing story sheds some interesting light on what’s been known for some time as “the big sort,” geographic sorting by interests. It’s a short, worthwhile read.

Also exploring the urban-rural divide is a recent Associated Press story looking at the divide in Oregon.

With the state’s population becoming more concentrated around Portland, and Eastern Oregon and Multnomah County becoming so politically disparate, the political voices of East Oregonians have become increasingly silenced. A state that at one time was politically homogeneous has become as polarized as anywhere in the country.

In 2008, three professors from Portland State University, Western Oregon University and Oregon State University delivered a paper at the Toward One Oregon Conference in Salem. The paper, titled “The Politics of One Oregon: The Causes, Consequences and

Mark Henkels is a professor of public policy and administration at WOU and co-authored the 44-page paper. He told The Observer the growth of the divide can be boiled down to two major causes.

“One is the economics and the second is cultural,” Henkels said

Again, the story is worth reading to understand the fundamental shifts that appear to be occurring. Here’s an important takeaway:

The strongest way for Oregon to become less divided, the paper argues, is for a rural economic revitalization.

“More than anything else, if the state government took steps to help booster the economic position of the rural communities, the rural and urban areas would no longer be as divided by differences in economic well-being,” the paper concludes. “As a result, one might find more agreement on other policy issues.”

Efforts to boost economic prosperity statewide, with an appreciation of the challenges faced by rural communities, are increasingly urgent. And there’s reason to believe those efforts can succeed.