The Oregon economy is not the Washington economy. That’s been true for decades, from back when a Washington economist would call Oregon “Washington without Boeing.” Today, he’d add Amazon, Microsoft, and more. (Build your own list.) But a recent report from the Oregon Office of Economic Analysis caught our attention as another cautionary signal.

One trend so far in 2019 has been considerably slower job growth. Our office’s forecast has called for job gains to slow a bit but remain above trend through mid-2020 before cyclical growth slows and the demographic drag weighs to a larger degree. However, so far this year job gains are significantly below expectations. This slowdown appears to be legitimate as it is evident in both the household and payroll surveys.

This graph was surprising and a seeming refutation of the urban-rural jobs divide. 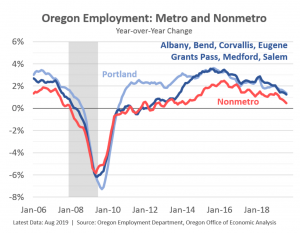 The slower job growth is seen across the state, in both urban and rural Oregon. Only about 5 counties are adding more jobs per month in 2019 than they did in 2018, while the vast majority are experiencing slower growth or even losses.

He breaks it down by sector. 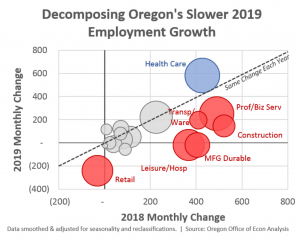 He notes that only health care is growing faster than it did in 2018. He closes by asking the relevant question and positing three tentative answers.

Why are we seeing the slowdown in Oregon employment growth? I’m going to hold off on giving my thoughts on this until after our advisory meetings. However I see at least three main channels in which a slowdown could materialize.

First would be lower business demand. If firms realize slower sales growth or costs rising faster than revenues, they may pull back on hiring. This could be due to weak consumer spending, a drop if foreign sales tied to the trade war, or policies that raise the cost of doing business. Second would be firms putting off hiring today because they are unsure of future sales, even as current conditions remain favorable. Third would be the lack of available workers. The economy really may be at full employment, or migration may be slowing more than expected, or retirements may be increasing faster than expected. All of those would result in fewer available workers to hire even if businesses wanted to fill openings.

All of those responses have featured in the national forecasts of a slowdown. While Washington’s economy is not Oregon’s, we should also not assume we won’t be affected by the same forces that have pushed down employment growth there. In fact, we know we are.