In yesterday’s newsletter, we released the results of our November poll of Washington voters. In short, Washington voters have grown increasingly worried about the direction of our state, about the health of the economy, and their personal financial health. The results from this November survey* contrast with a poll we conducted last February. On all key measures, pessimism has grown. 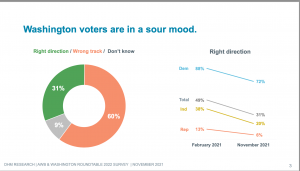 As the above slide says, voters are in a sour mood. Six out of ten Washington voters think the state is on the wrong track. In February, the survey showed nearly half of the population said things were headed in the right direction. Last month, that fell to 31%. Remember, this was before the official inflation numbers were released, confirming perceptions that the price of nearly everything was rising at a clip not seen in decades.

Voters were asked to weigh in on state fiscal policy. Here’s the question and responses:

Notice the percentage of those saying “we spend too much on public services and taxes should be reduced” increased from 34% in February to 51% in November. The following slide shows the sharp increase in that sentiment among Independent voters and King County residents. 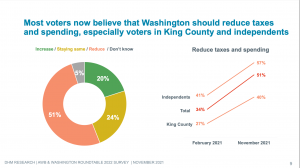 We’ll look at more of the poll results in other posts this week.
*Opportunity Washington is a partnership of the Washington Roundtable and Association of Washington Business, the two groups identified on the slides as sponsoring the survey. The poll was conducted by DHM Research November 8-11, 2021 as a hybrid survey (phone and text-to-online) of 600 Washington voters. Quotas were set by gender, age, areas of the state, education and race to ensure a representative sample. The results have a margin of error of plus-or-minus 4%.