Getting the minimum wage right is not easy, either as a matter of economics or politics. Expert opinion is divided. A year ago, the Washington Research Council published a special report reviewing the literature, concluding.

Increases in the minimum wage are a tradeoff. Some gain, but many lose. Those who keep their jobs and their hours benefit. But those employees who lose their jobs or have their hours reduced lose out. Research shows that the negative impacts on individuals and businesses are real and long-lasting.

Public opinion on the issue also varies, although there’s broad general support for increasing the federal minimum wage, as Pew Research reports. An often-overlooked issue is the variation in living costs, as explored briefly in this Washington Post story last July. 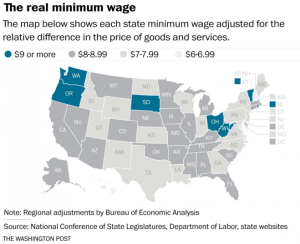 Given all that, it’s not surprising that Oregon, Washington and Idaho would be taking different approaches to the minimum wage, as reported by the Northwest News Network.

Three states, three ways of addressing whether and how to raise the statewide minimum wage.

Legislation and possible ballot initiatives are in play, and the NNW story gives a good overview. Details aside, it’s instructive to consider how the different state economies and labor markets might respond to wage increases. And, of course, within each state the labor markets vary by region, with metro areas like Seattle and Portland operating in a different economic environment than small towns and rural communities.

As metro areas, like Seattle, adopt local labor law and minimum wage policies, there is inevitable pushback from state lawmakers. The Associated Press reports that in Idaho, legislators are “increasingly saying ‘no’ to local government control.” The two cited examples are plastic bag regulation and local minimum wages.

…the GOP super­majority said the measures are needed to prevent a mish-mashed set of laws across the state that could make it difficult for businesses to thrive.

The Association of Washington Business has a timely post on current legislative minimum wage proposals here.

With a ballot measure to increase the minimum wage to $13.50 an hour likely to be on the ballot this year – and with polls showing heavy voter support – AWB is working in the Legislature to find a solution that couples an increase of the minimum wage with sensible and much-needed protections for small businesses and other employers.

KPLU reported on legislative efforts to prevent a “checkerboard” of wage laws that “wreak havoc amongst the business community.” Opportunity Washington has a new blog post noting that recent comments by President Barack Obama suggest that he understands the harm a high minimum wage does for young and inexperienced workers – a problem that a training wage could help solve.

We also discussed the “checkerboard” problem in our foundation report.

In addition to the absolute costs of these measures, and the challenge they create in competing with other employers not subject to the same mandates, local governments’ wage and benefit regulations create compliance problems for employers operating in multiple jurisdictions. They also create difficulties as employers look to align their human resource policies among cities with different mandates.

As AWB points out, policies like minimum wage hikes involve a careful balancing of interests. States in our region and nationally are struggling now to get the balance right. It’s important to get it right here.