A short report from Pew demonstrates just how widely disparate is the share of funding ARPA dollars represent relative to state budgets. The map below tells the story. 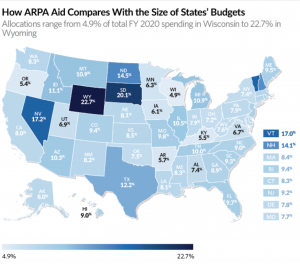 As the map shows, Washington’s allocation represents about 8.3% of the budget, on the low side. Of course, two variables are involved: the amount of ARPA funding and the size of the state budget, which in Washington has grown substantially in recent years.

From the Pew report:

State governments are beginning to receive the first allocations from $193.5 billion in American Rescue Plan Act (ARPA) funds, which they can deploy for a wide range of uses as they contend with fallout from the COVID-19 pandemic.

For states such as South Dakota and Wyoming, the federal aid represents a huge boost for their budgets—about one-fifth of what they spent in fiscal year 2020. In states where the aid equates to a low of about 5% of state spending, such as Oregon and Wisconsin, the infusion of federal cash is still significant, enough to offset most pandemic-driven general fund revenue declines so far. Plus, the money positions some states to make investments with large price tags, such as broadband, water system, and sewer upgrades, or to address issues such as depleted unemployment insurance accounts.

Joblessness is another critical factor.

The amount of ARPA dollars that states will receive varies based on the number of unemployed workers in late 2020. States experienced different levels of joblessness as a result of the pandemic, and some bounced back faster than others. In addition, the program allocates each state a separate $500 million, which will have a much more significant impact in those with smaller populations and less annual spending.

ARPA’s allocation methodology favors states with economies that lagged in the recovery late last year, with the majority of dollars based on each state’s share of the nation’s unemployed workers from October through December. Then each state gets the additional $500 million, regardless of population.

That last segment provides a substantial boost to less populous states. Wyoming has the fewest people but is slated to receive nearly $1.1 billion, an amount equivalent to 22.7% of its total spending in fiscal 2020—the largest percentage of any state. Wyoming, which has incurred major reductions in revenue, approved another round of budget cuts in April that eliminated 324 state employee positions.

It’s an interesting read. For more on how Washington is using federal funds (not just ARPA), we recommend a series of Washington Research Council blog posts, including:

Almost $90 billion in federal relief has so far been allocated to individuals, businesses, and governments in Washington

Second-guessing federal relief, now that budget situations in many states have improved (plus, allocations of federal relief for non-metro cities in Washington)

Not only is the new child care bill initially funded with one-time federal money, its cost is expected to balloon in 2025–27 (beyond the four-year budget window)

ARPA represents the single largest state government aid package since the pandemic began and is the latest in a series of laws providing unprecedented federal emergency support to states. In addition to the $193.5 billion in flexible aid, ARPA provides states with separate funding for targeted uses, such as COVID-19 vaccine distribution, safe operation of schools, and substance abuse programs.

The Coronavirus Aid, Relief, and Economic Security (CARES) Act enacted in 2020 shortly after the pandemic began allocated $150 billion to help state, local, and tribal governments pay for costs related to the public health emergency. The federal government also started covering a higher share of states’ Medicaid costs temporarily under the Families First Coronavirus Response Act and is expected to continue to do so through at least early next year. Additional federal funding has targeted local schools, higher education, transit systems, and other areas of states’ budgets.

Among the unknowns as states see own-source revenues rebound is how, if at all, the tidal wave of pandemic related federal aid distorts regular budget processes. We suspect there will be an effect.