Hospitality and leisure employment has suffered greatly in the pandemic. A new report from Pew analyzes the state-by-state impact.

Nationally, leisure and hospitality jobs have endured by far the largest losses of any major industry. A review of U.S. Department of Labor jobs data for August, however, shows vast differences in how the industry has held up across states. Seven had incurred sharp reductions of a third or more from February’s pre-pandemic employment totals. A few others, meanwhile, had largely recovered from an initial wave of layoffs and were down less than 10%. For areas that lean heavily on tourism and hospitality, how the industry recovers matters not only for regional economies, but also for the vital tax dollars generated to fund state and local government budgets.

Particularly hard hit were the tourism-driven states of Hawaii, Nevada, and Florida, the three states “most reliant on leisure and hospitality jobs.”

As the map below shows, nationally the sector lost 24.5% of its jobs. In Washington, the job loss was greater, 30.5%. 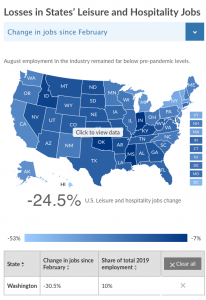 Within the industry, some sectors have been hit harder than others.

About 40% of U.S. hotel jobs (excluding casinos) and half of performing arts and sports positions have been eliminated temporarily or permanently since February, compared with 19% for restaurants and other eateries.

In September, we cited an op-ed by Anthony Anton, head of the Washington Hospitality Association, in which he wrote,

The hospitality industry is the largest private employer in our state. Before COVID-19, restaurants and hotels employed about 300,000 people. The most recent numbers from the Employment Security Department show that 114,000 of our team members are no longer working. And for every dollar spent at a restaurant, 96 cents is put back into the local economy. Our state’s economic health and the health of our hospitality industry truly go hand in hand.

The industry’s recovery is inseparable from the state’s economic recovery. And we’d be remiss were we not to mention the potentially devastating effects of a large unemployment insurance tax hike on business in 2021.