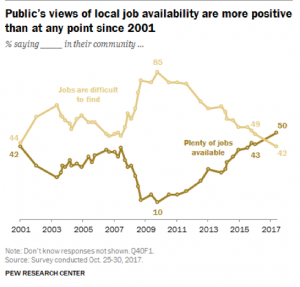 Currently, 50% of Americans say there are plenty of jobs available in their communities – the highest number saying that jobs are plentiful in Pew Research Center surveys dating to 2001.

However, the public’s brighter outlook on jobs has not been matched by comparable improvement in views of whether people’s incomes are keeping pace with the cost of living.

Currently, 49% saying their family’s income is falling behind the cost of living, while 40% feel they’re staying about even and just 9% feel like they’re getting ahead. These views are little changed over the past two years, though the share saying they are falling behind financially is lower today than in 2014 or early 2015.

The Hill reports on the political implications of survey findings.

The contrast is likely to present a challenge to politicians at all levels running for office next year. Those seeking reelection must find a way to claim credit for the improving economy while simultaneously empathizing with those struggling to keep up.

As The Hill reports, partisans are taking notice.

“Voters are kind of willing to structurally say the economy is getting better in certain ways as their own personal situations are not,” said Nick Gourevitch, a partner at the Democratic polling firm Global Strategy Group. “The micro is still very negative out there.”

The Pew analysis suggests perceptions may be influenced by political leanings.

Today, Democrats and Democratic leaners (56%) are significantly more likely than Republicans and Republican leaners (37%) to say that their income is falling behind the cost of living. The reverse was true in surveys conducted from 2014 through 2016, during the Obama administration; however, the size of the partisan gap was somewhat less pronounced in that period than it is today.

Reflecting a similar partisan pattern, Democrats were more likely than Republicans to say their incomes were falling behind the cost of living in surveys conducted throughout the second term of George W. Bush’s presidency.

Perceptions matter; they influence behavior. And, here in Washington, it’s important to remember that our state economy consistently outperforms the nation as a whole. Over the next five years, 740,000 new jobs will come open. That’s a reality. Every student in our state should recognize that those openings are opportunities to succeed in a growing economy. With the right education and training – a postsecondary credential or college will be necessary – there’s no reason to fear falling behind.