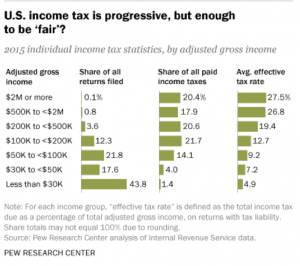 With tax reform on the Congressional agenda and a constant source of discussion here, a new release from Pew Research Center is timely and informative. Drew DeSilver writes,

The individual income tax is designed to be progressive – those with higher incomes pay at higher rates. A Pew Research Center analysis of IRS data from 2015, the most recent available, shows that taxpayers with incomes of $200,000 or more paid well over half (58.8%) of federal income taxes, though they accounted for only 4.5% of all returns filed (6.8% of all taxable returns).

By contrast, taxpayers with incomes below $30,000 filed nearly 44% of all returns but paid just 1.4% of all federal income tax – in fact, two-thirds of the nearly 66 million returns filed by people in that lowest income tier owed no tax at all.

It’s important to ground discussions of tax policy in the larger context. Despite frequent reports decrying Washington’s “regressive” tax structure, there’s a strong argument for considering evaluating the distribution of the tax burden taking into account local, state and federal taxes. And, as the state’s 2002 Washington State Tax Structure Study Committee reported, the differences among states are less significant than supposed.

Analysis by the Committee confirmed that when evaluating the total tax system−local, state and federal−all states have progressive taxes and the differences among states are not as great.

Although many things have changed in 15 years, that conclusion remains valid. DeSilver writes,

Generally speaking, effective tax rates fell across the board throughout most of the 2000s, though the highest-income tiers experienced the steepest drops. Effective rates on those same groups rose sharply, however, following enactment of the American Taxpayer Relief Act of 2012. That law, part of the congressional deal that resolved the 2012-13 “fiscal cliff,” undid many of the George W. Bush-era tax cuts for upper-income taxpayers while retaining them for middle- and lower-income people.

For more on all this, see this Tax Policy Center Briefing Book. And note: The question posed in the table header – is the distribution ‘fair’? – is as mischievous as it is unanswerable.