Pew Research takes a long look at how states have recovered from the recession. The “Lost Decade” report describes a period of lost opportunity for many states, using a familiar metaphor.

Like a family that suffered a job loss or pay cut during the recession, states missed out on billions of dollars in tax revenue. Even if a family’s earnings are now back to par, the household faces consequences from those years when it was unable to save for college, add to retirement accounts, or fix the roof.

The analogy may be a little strained. And the discussion could perhaps be a little more sympathetic to the actual families that suffered job losses, stagnant wages, etc., during the period. But let’s not quibble. Besides, the report says,

To be sure, most states’ annual finances were better off heading into 2019 legislative sessions than they had been in 10 years. As The Pew Charitable Trusts’ Fiscal 50 tool shows, states’ combined inflation-adjusted tax revenue was more than 13 percent higher than at its 2008 peak, just before receipts plunged and the lost decade began.

If rising expenditures are a measure of fiscal health (an arguable proposition), our state is in extraordinary shape, as the chart below shows. We’re in fifth place in expenditure growth, behind North Dakota, Colorado, Hawaii, and Texas. This is before taking into account the 18.3 percent jump in spending approved by the Legislature and signed by the governor this year. 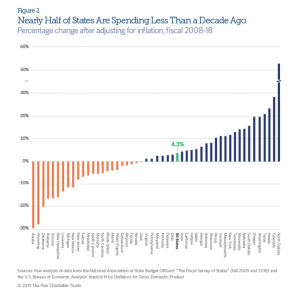 One of the challenges involved in applying a national perspective to a review of the 50 states is that state economies vary significantly, as do the fiscal preferences of governors and lawmakers. Pew does an admirable job of recognizing these differences as it draws policy lessons from the decade. The report and underlying data will be of interest to policy analysts and policymakers.