We’ve written often about the challenges employers face in finding qualified workers. And the problems prospective employees face if they lack the credentials required to gain employment in today’s economy. The credential, we emphasize, continues to be essential.

Across the nation, though, there’s also a significant gap between job seekers and jobs available. Pew reports that in most states, there are more jobs than job seekers.

A labor shortage is jeopardizing economic expansion in almost every state, putting pressure on lawmakers to find ways to attract more residents and coax people who have dropped out of the workforce to rejoin it.

States are offering financial incentives to entice prodigal natives to move home and raise families. They’re also reaching out to discouraged workers who don’t show up in the record-low unemployment rate because they’ve given up seeking jobs. Among them: people with outdated skills, high-school dropouts and those with criminal records.

In 39 states, there are more jobs than people looking for them, according to a Statelineanalysis of June hiring and employment data from the federal Bureau of Labor Statistics.

Notice the reference to the skills gap. Pew maps the states. It’s an interactive map. We pulled out the numbers for the West Coast states. 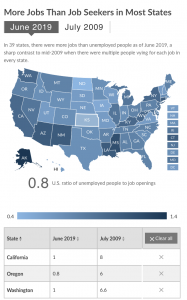 Washington’s 1:1 ratio is better than most states. Yet, employers here continue to report significant challenges in finding applicants with the requisite skills.

States have two options to deal with labor shortages, said Ryan Nunn, policy director at the Hamilton Project, an economic policy initiative of the Brookings Institution. The first is a “zero-sum game” in which they compete with other states to attract the same workers. The second is a “positive sum” response: making existing workers more productive by giving them new skills, and training new workers drawn from disadvantaged groups like prisoners and dropouts.

A statement from the Upper Midwest is broadly applicable.

“The Great Lakes states are all about manual labor. When companies want to cut their costs, the obvious way is to cut labor costs,” Devaraj said. “Automation will bring the need for new skill sets, and this should be taught in schools. When machines are doing more work, there will be a high demand for people who can fix the machines.”