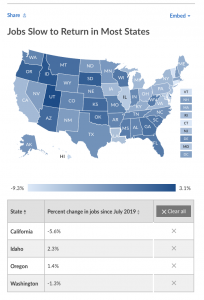 A Pew analysis of national data reveals an uneven jobs recovery among the states, as the map and table above show. (Click through to construct your own comparative table; we selected west coast and neighboring states.)

Washington is among the states still showing fewer jobs than in July 2019, down 1.3%. That’s better than California, but well off the Idaho and Oregon mark.

Pew writes that the growth states are outliers.

Forty-one states and the District of Columbia had fewer jobs in July of this year than they had in July 2019. New England states have fared particularly poorly, while fast-growing Western states such as Utah and Idaho have bucked the overall trend.

The few states that have more jobs than they did before the pandemic are fast-growing, mostly Western states with booming economies, scenic beauty and a relatively low cost of living. Utah gained almost 50,000 jobs or about 3% since July 2019, and Oregon gained almost 30,000 or 1%. Arizona and Idaho were close behind with about 20,000 jobs added.

The report concludes with another, familiar, expression of uncertainty.

If there’s one thing experts agree on, it’s the unpredictability of what comes next.

“We have no idea what things will look like in six months. It won’t be comparable to anything that’s going on now,” said Dubay, the U.S. Chamber of Commerce economist.