No surprise. Washington voters oppose three of the four tax proposals being discussed by state legislators in the weeks before the legislative session next week, according to a new Crosscut/Elway Poll.

Here’s the Crosscut graphic summarizing the polling on the taxes. 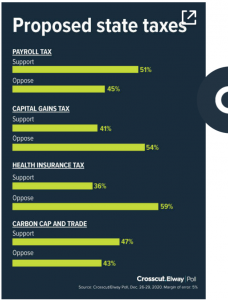 Only 41% of voters surveyed said they support enacting a new tax on capital gains, one of the key measures Democratic leaders in Olympia are considering to help raise more money for state programs.

That’s lower than in past years. In 2019, 44% of Crosscut/Elway Poll respondents said they would “probably” or “definitely” support a version of that tax, which would affect profits from selling assets such as stocks and bonds. In January 2015, 58% of those surveyed said they favored such a tax.

Poll respondents were even less enthused this year about a plan to tax health insurance companies, which Democratic Gov. Jay Inslee suggested last month as part of his 2021 budget proposal.

A plan to enact a statewide cap-and-trade program, which is designed to limit greenhouse gas emissions, was slightly better received. Even so, fewer than half of the voters surveyed — 47% — said they favored the idea.

Only one proposal managed to eke out razor-thin majority support.

The one tax measure that a slim majority of voters appeared to support was a statewide corporate payroll tax. That tax, similar to one recently passed in Seattle, was favored by 51% of survey respondents.

That’s because they doubt they’d pay it.

Elway said the corporate payroll tax measure likely fared better than others because “it’s the one people figure they won’t have to pay.”

That 51% suggests strongly that any organized opposition to the tax could quickly tilt the balance. Santos had previously reported on how Seattle’s payroll tax complicates any consideration of a look-alike tax at the state level.

The good news for taxpayers and lawmakers is that the tax increases aren’t required.