As school funding seems likely to be–yet again–the dominant in 2016, it’s worth remembering what was accomplished this past session. Even the state Supreme Court acknowledges that lawmakers made “significant progress” toward achieving the McCleary goals. (The court still wants a plan and cites shortcomings, but concedes that lawmakers should be “commended” for their efforts.)

It’s important to understand how that progress was made: By making K-12 funding a priority and allocating a significant share of growing state revenues to funding the priority. The Washington Research Council’s analysis of the state budget makes the point clearly. Overall spending increased 13.1 percent and K-12 spending increased 19 percent. The WRC writes,

Including maintenance and policy level changes, NGFS+ spending on public schools is increased by $2.894 billion (19.0 percent) over 2013– 15. The share of the NGFS+ budget devoted to public schools increases to 47.5 percent from 45.2 percent. Of the increase, $1.3 billion responds to the McCleary decision. This includes $741 million for materials, supplies and operating costs (considered part of maintenance level); $350.2 million for class size reductions in kindergarten through third grade; and $179.8 million to expand full-day kindergarten.

We bring this up, in part, in reference to an op-ed by Bill Keim, president of the Washington Association of School Administrators. He recites familiar arguments: taxes as a share of state personal income have declined, the state’s tax burden as a share of PI has declined relative to other states, and spending for education as a share of the state GDP is also down. The statistics are right, but miss the point in key respects.

The state tax burden as a share of personal income declined primarily for two reasons:

Although the decline in education funding as a share of the economy fell along with the tax burden, the other major story is the substantial growth in the non-education share of the budget. From the op-ed,

…if our Legislature had merely maintained the percent of GDP that was going to public education in 1996, there would be more than enough revenue to fully fund public education.

This chart from another WRC study looks at budget growth up to the Great Recession. 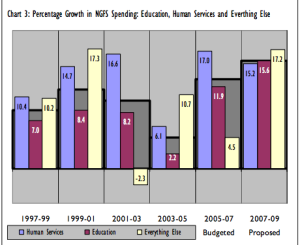 Note the decline in share for education in several high-growth biennia. The rise in Medicaid spending accounts for much of the bump in human services spending.

Finally, it should be pointed out that while the tax burden as a share of personal income has declined, the per capita burden has increased steadily. From our research report,

For fiscal year (FY) 2011, the state and local tax burden of Washington residents ranked 13th highest in the nation on a per-capita basis, at a combined $4,366. This figure exceeds the national average of $4,217.

On another measure of tax burden, however, Washington is more in the middle of the pack. Total state and local taxes absorbed 9.4 percent of Washington personal income, slightly less than the overall U.S. average of 9.8 percent, placing Washington 27th among the states in state and local taxes paid as a share of income. (Washington ranks lower in burden relative to income than in burden per capita because the state’s personal income, a measure of the strength of the economy, is relatively high.)

The make-up of those taxes, however, places a relatively high burden on employers. Washington’s revenue structure relies to an unusual degree on business taxes, with businesses paying 54.2 percent of the taxes received by Washington’s state and local governments in FY 2013 ($17.0 billion). In 42 other states, businesses pay a lower share of the overall state-local tax burden. Nationally, businesses paid an average of 44.9 percent of state and local taxes88 — nearly 10 percentage points lower than the business tax share in Washington.

We share Dr. Keim’s belief that the state must fund K-12 education adequately. Getting there, however, begins with setting the right budget priorities and making sure public policy encourages economic growth.

In other news relating to education funding and priorities,

School was canceled in Pasco for Tuesday, Wednesday and Thursday, which would have been the first days of classes, after the Franklin County school district and union were unable to reach an agreement…

In Spokane, union members said they will strike Friday if the bargaining team and school district don’t agree on a tentative contract by that time.