As the special session limps forward, property taxes are receiving a lot of attention. We’ve written before about local levies and compensation reform, the “levy swap,” and the state Supreme Court decision driving the current discussion.

To put our property taxes in perspective, it’s useful to take a look at the variation among the states. (Plus it gives us a chance to link to this cool interactive map put together by the Pew Foundation.) The picture below tells much of the story, but if you go to the map, you’ll see data on tax increase since 2000, the statewide median, and the highest county tax. 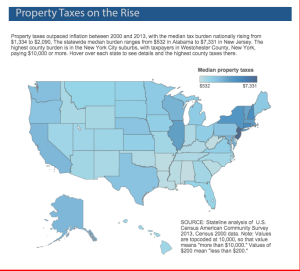 Superintendent Randy Dorn has an op-ed in The News Tribune in which he makes a number of recommendations for how the Legislature can address the court’s McCleary decision. Among them:

* Reform the compensation system. The state must fund the salaries and benefits for all staff who provide basic education. Eliminating the use of levy funding should lead to a system of statewide collective bargaining, rather than local bargaining, and include regional cost-of-living adjustments.

In addition, we should provide K-12 health insurance through a statewide benefit program similar to the plan now used by state employees.

• Reform the levy system. Legislation is needed to clearly define the appropriate uses of local levy funds and redefine supplemental contracts. The cost of providing an equitable, high-quality basic education to all students is a state responsibility. Passing off this obligation to districts puts a burden on local taxpayers that is unfair and inequitable to districts, making it more difficult to close achievement gaps.

• Review and update education provisions regularly. We need to create processes to design a better system to recruit and retain teachers, and to monitor the evolving definition of “basic education.”

The connection between local levies and compensation is an important one. House Appropriations chairman Ross Hunter, one of the originators of the levy swap idea, discusses it in a recent blog post. (It’s worth reading in its entirety.) Hunter cites a good Seattle Times story that examines the disparity in teacher compensation across the state. The Times explains succinctly how compensation and levies link:

On average, the state covers about 81 percent of teachers’ salaries, and local districts make up the rest, roughly $13,000 per teacher.

The local share for school administrators is even greater, with districts paying about 47 percent of their salaries.

Districts, on average, spend about 54 percent of their local levy money on salaries and benefits for teachers and other staff, according to a legislative working group.

Districts’ reliance on local tax resources for basics such as pay, the court found, has led to an uneven education system because wealthier school districts are able to raise more money than poorer ones.

It’s hard to address levies without reforming compensation. That’s one of the reasons this session has gone into overtime. As they say, it’s complicated.