Washington had the nation’s 7th worst highway system in 2013, according to the Reason Foundation’s Annual Highway Report. (h/t to the Association of Washington Business.) The research report ranks Washington 43rd in its overall assessment of “highway performance and cost-effectiveness.”

based on spending and performance data that state highway agencies submitted to the federal government for 2013, the most recent year with complete data available. 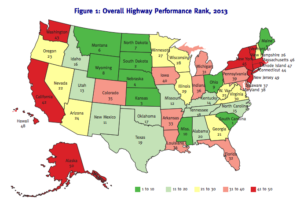 Reason describes its method this way:

This year’s best overall states are South Carolina, South Dakota, Kansas, Nebraska and Maine. At the bottom of the overall rankings are Alaska, New Jersey, Hawaii, Rhode Island and Massachusetts.

According to new data on bridge conditions, Washington is holding steady with 25.8 percent of bridges rated as functionally obsolete or structurally deficient. However, conditions have worsened in other states, giving Washington a bump up in the Connect score.

Top performer: Kansas takes the top spot with a Connect score of 121. Eighty-two percent of roads in that state are rated good or very good, compared to 50 percent in Washington. Kansas also has a lower percentage of deficient bridges (16.3 percent) compared to Washington. Montana, North Dakota, Nevada, and New Mexico round up the top five in Connect.

Although using different metrics, the reports do align in that the top ranking states are, using the Reason Foundation’s words, “rural states with limited traffic congestion.” But there’s no reason Washington cannot rise in the rankings in future years.

Our state’s critically  important transportation finance package will take several years to produce the positive benefits statewide, and longer to show up in the data used by groups like Reason (and Opportunity Washington) for interstate comparisons. But it will produce benefits.

As business leaders wrote in a PSBJ commentary in July 2015,

This package includes more than $1.3 billion for preservation and maintenance, which will enable the state to take better care of its roads and bridges. It provides $8.8 billion for construction, making key investments and finishing projects in important economic corridors such as SR 520, the Puget Sound Gateway (State Routes 167 and 509), and the I-90 expansion over Snoqualmie Pass. It also provides $445 million in direct distributions to cities and counties for local projects.

This package delivers on the promise of a more integrated system. It provides $1 billion for the multimodal fund. Add to that, commuters and visitors will benefit from a $602 million investment in the state ferry system. Voters in the Puget Sound region also will have an opportunity to consider a major expansion of high-capacity transit.

The Reason Foundation study is a good reminder of why the investment was necessary.