The economic impact of this pandemic won’t be known until after the public health crisis ends. While no one knows when that will be, it’s clear that the economic damage has already begun to set in.

In The Lens, TJ Martinell reports the state’s chief economist is watching this closely.

Also preparing for a downturn is ERFC Executive Director & Chief Economist Steve Lerch. “I was hoping to avoid a recession during my tenure. Now I’m not so sure.”

…Lerch also told Lens that with regional economic downturns, “the rest of the country can at times pull others through those periods. That’s what troubles me about this (virus). This is a worldwide impact. This is hitting the entire industrialized world.”

While the historic drop in the Dow Jones may ultimately trigger a downturn, actual economic data covering the time period most impacted by the virus in Washington won’t be available for a while.

The slowdown in economic activity due to COVID-19 really started in early March. For monthly and quarterly taxpayers, taxes on March activity will be remitted to the state in April and will be reported in ERFC’s Economic and Revenue Update for May. It will thus be two months before we see the effect of COVID-19 on state revenues.

Emily Makings with the WRC also calls attention to a Route Fifty story on the pandemic’s effect on state budgets. Washington is among those featured.

David Schumacher, director of Washington’s Office of Financial Management, said that when he looks at the public health crisis in his state strictly from a budgeting perspective, he is more concerned about lost revenues than the additional costs.

“We may end up spending a few hundred million dollars addressing the public health problem,” he said. “But we could lose a few billion.”

“That’s the bigger budget crisis,” Schumacher said, “the revenues dropping through the floor.” For now, though, he added: “We just have no idea what this is going to mean to the economy. Is this going to last two weeks, two months, six months?”

In The Seattle Times, Daniel Beekman reports on a metro Seattle economic impact study. The numbers are daunting.

The region’s economy is experiencing “an economic shock that will take many months and beyond to recover from,” with impacts likely to result in wage reductions or temporary layoffs in about 40% of all jobs in King, Pierce and Snohomish counties, says the study by the Seattle-based research firm Community Attributes Inc. (CAI).

Yes, it will end, the study points out. But the post-virus economy will be different.

“Many of these jobs will start again once the virus threat has passed and the economy starts up again,” the study says. “Not all businesses will survive this challenge.”

This chart for the report does a great job of depicting the cycle. 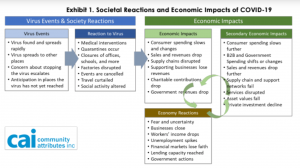 As Beekman did, we’ll give the last word to the study’s sponsor.

“This is hard. This is painful. And this is the time to rally together,”  Chamber Vice President Markham McIntyre said in a statement.

“We are 2-3 weeks ahead of many other areas across the country. Our collective response to the crisis will be the model for other communities. Let’s continue doing everything we can to help the businesses and workers who are particularly vulnerable to the outbreak and its economic impact, and let’s stick together,” McIntyre said.