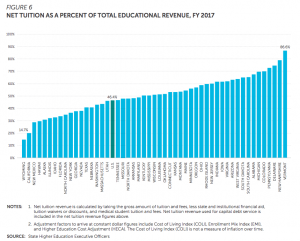 Stateline reports that across the country, tuition has overtaken state dollars in funding higher education. The chart above, from a new report from State Higher Education Executive Officers Association, shows that Washington remains among the states least reliant on tuition payments.

Here’s how the group describes what we see in the chart.

State colleges and universities are relying more on tuition dollars to fund their operations even as state funding rises and colleges come under pressure to keep tuition low.

One of the biggest moves was a pledge by lawmakers to fully fund the State Need Grant, the state’s $300 million college financial-aid program, which has been unable to provide aid to all of the students who qualified for it since 2009.

Although the cost of college has been rising for students and families, so has the potential economic benefit of earning a postsecondary credential or degree.