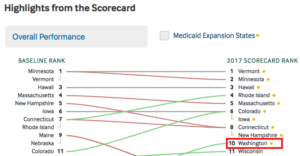 Washington ranks tenth among the states for overall health systems performance, according to a new study by the Commonwealth Fund.

Reporting on the study for the National Conference of State Legislatures, Ashley Noble writes,

The report follows up on the Commonwealth Fund’s previous scorecards in analyzing state performance and progress across 44 indicators in five broadly defined categories, including: Access and Affordability, Avoidable Hospital Use and Costs, Equity, Healthy Lives, and Prevention and Treatment.

All states improved in at least one category over the course of 2013-15.

Vermont was the top-ranked state overall in this year’s Scorecard, followed by Minnesota, Hawaii, Rhode Island, and Massachusetts (Exhibit 1). California, Colorado, Kentucky, New York, and Washington made the biggest jumps in ranking, with New York moving into the top-performing group for the first time. Kentucky also stood out for having improved on more measures than any other state.

The Commonwealth Fund finds significant disparities among the states in system performance. And, it concludes, all states can do better.

All states have the opportunity to improve, including those at the top. On certain indicators, states that ranked lower overall performed better than those at the top of the overall rankings, which suggests that states can learn from each other. If every state achieved the performance of the top-ranked state on each Scorecard indicator, their residents and the country as a whole would realize dramatic gains in access, quality, efficiency, and health outcomes.

Noting the ongoing debate about changes in the Affordable Care Act, Commonwealth advises,

With the future uncertain, it will be more important than ever to track state health system performance as states assume greater responsibility for the future of health policy.

Health care insurance, cost and access remain a significant concerns for individuals and employers. With that in mind, the Commonwealth Fund report provides good information for those engaged in health policy development.