There’s more in her blog post, which she says will be updated as analysis continues.  We found this context statement from the proposal to be of interest:

The 2020 Legislature closed their session with the passage of legislation to address the COVID- 19 pandemic. Little did anyone know that the 2021 Legislature would begin in much the same place. The COVID-19 pandemic continues to affect the lives of all Washingtonians, the economy, and the state budget in different and unexpected ways. The hospitality industry has experienced large-scale job losses and business closures while other industries such as technology have grown. The federal government has enacted five COVID-19 funding bills to stimulate the economy and address the financial and societal hardships. Cumulatively, over $30 billion in federal stimulus payments have been provided to individuals, households, and businesses as well as to the state, local governments, institutions of higher education and common schools.

The 2020 Legislature also closed with the expectation of a serious recession to rival the Great Recession. However, the 2021 Legislature begins the budget process with $2 billion more revenue1 than the 2020 Legislature did for the preceding 2019-21 biennium. Projected costs for continuing current programs and other mandatory cost adjustments are expected to increase by $2.4 billion in 2021-23.

HB 1496 sponsored by Rep. Tana Senn (D-41) would impose a seven percent tax on capital gains income from the sale of long-term assets that are “tangible” property, while applying a 9.9 percent tax on the income derived from the sale of all other long-term assets. The tax is expected to generate $835 million in the 2021-23 biennium and $1.8 billion from 2023-25. Most of that money would go to the Fair Start for Kids Account, with the rest deposited into the general fund account…

However, like with other related bills, HB 1496 received close scrutiny from tax experts who questioned its timeliness, practicality, and legality. National Taxpayers Union Foundation Vice President of Policy & Litigation Joe Bishop-Henchman told the committee that capital gains are an incredibly volatile source of revenue. “If a stated goal of adopting this tax is to improve stable tax revenue sources for vital government services, it will have the opposite effect.”

Another hurdle for proponents is that while these bills are portrayed as imposing an excise tax, Bishop-Henchman said “transaction taxes do not have exemption levels. They are not imposed on annual totals. This is an income tax – not a transaction tax. State income taxes do all those things. The IRS (Internal Revenue Service), every other state, and every tax expert agree that capital gains are income.”

Martinell also reports on a proposal to boost the state’s estate tax.

Washington state has the highest death tax rate in the country, and HB 1456 sponsored by Rep. Tina Orwall (D-33) would increase that rate for higher taxable estates and use a portion of the revenue to fund a housing equity account. While proponents say it will make the state tax code more progressive and aid affordable housing efforts, critics warned at the bill’s Feb. 9 public hearing in the House Finance Committee that it would hit small business owners particularly hard.

“We’re not really too concerned about billionaires,” Washington Policy Center Research Director Paul Guppy told the committee. “I think they can take care of themselves. It’s really small business owners…they’ve already paid taxes on what they’ve earned throughout their lifetime, and then death becomes a taxable event.”

He added that the rate increase would make the 30 states without a death tax “more attractive for high wealth individuals.”

We written previously about Washington’s nation-leading estate tax rate. This Tax Foundation map makes clear that most states have chosen to do without the tax. 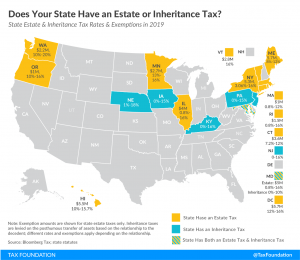 Twelve states and the District of Columbia impose estate taxes and six impose inheritance taxes. Maryland is the only state to impose both.

Why have these death taxes fallen out of favor? She traces the history, and concludes.

It’s not common for the minority party’s budget proposals to take center-state in the legislative debate. This year, though, it would make sense for lawmakers to consider a budget that does not raise taxes. New taxes aren’t necessary to balance the budget.