The Washington Research Council has launched a series of blog posts to glean lessons from the Great Recession that may provide fiscal guidance as the state reels from the pandemic. The first post is especially interesting, as it shows the deep revenue losses beginning early in the recession.

The Economic and Revenue Forecast Council began reducing the general fund–state (GFS) forecast in November 2007. There was a slow drip of forecast revenue reductions until February 2012.

Gov. Inslee has said that the anticipated revenue losses in the coming months may lead him to call a special session of the Legislature to adjust the budget. The Associated Press reports,

The Legislature isn’t schedule to return until next January, but Inslee said it was probable they may need to return, “given the extent of the economic damage that we have suffered.” He said the timing of that is uncertain, but he said that he was ready to call the Legislature back early if more aggressive steps for spending was needed before the end of the year.

So far, it’s unclear when or how the economy will recover. One notion we find intriguing is what an Oregon economist calls the “square root recovery.”

While our office previous discussed the underlying conditions that could lead to the classic V or U-shaped recovery, today we’re introducing the possibility of a new path: the square root recovery. The reason will hopefully be self-evident in minute. I wish I could claim the name, but Mark’s the one who coined it the other day in our discussions. The nature of this outlook is beginning to gain some traction among forecasters and among our advisors. The thinking is as follows.

The sudden stop of the economy sends us into a severe recession overnight. Once the health situation improves some, the curve flattens and caseloads peak, the restrictions begin to be lifted. This results in some initial bounce back in economic activity, although far from 100%. We may be able to got out to eat, or get a haircut again, or the like. These firms will staff back up to meet this demand, but is the rebound 1/3 of the losses? 1/2 the losses? We don’t know that answer today.

Read the post for how events unfold. But here’s how it looks in this graph with a familiar square root symbol. 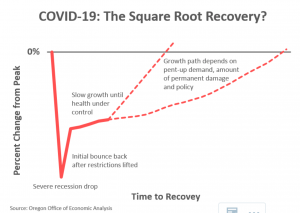 Even if the contours of recovery may be coming into focus, there are considerable ranges of outcomes at all of these key points. Just how severe is the initial drop? When do health restrictions begin to life, when does the bounce back start? How strong will that be?

And more. Critically, things don’t really get back to familiar economic trajectories until the public health crisis wanes. Quickly, please.

As the WRC reminds us, the toll from the Great Recession was severe.