What does an additional $861 million buy you?

If you’re a state legislator, it buys you breathing room. And more.

The Washington Research Council has reviewed the numbers. Although some lawmakers have argued that the carryforward from the state’s McCleary fix squeezed the 2019-201 budget to the extent that new taxes are required, Emily Makings writes,

The McCleary solution was fully funded in the 2018 supplemental, for the second year of the 2017–19 biennium. It’s true that because of that, the maintenance level for 2019–21 is unusually large. But that budget balanced over four years. And growing revenues since February 2018 have meant that more and more policy additions could be made without increasing taxes…

We’ll copy here the revenue chart produced by the WRC to demonstrate just how much revenues have grown in recent years. 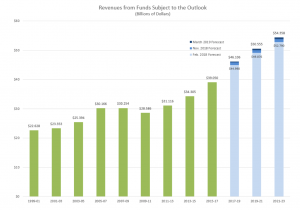 Makings also comments on other McCleary costs, pointing out that they’re also covered.

Additionally, after the forecast meeting, Sen. Rolfes noted that the McCleary funding didn’t include the full cost of school employee health benefits, and that that would need to be funded this year. The maintenance level already includes $297 million for this purpose. The governor’s budget estimated that the full amount would be about $940 million (or $646 million on top of the $297 million). Since then, the estimate of the full cost has been reduced to about $750 million, lessening the pressure on the budget still further.

In the Seattle Times, Joseph O’Sullivan reports on reactions to the new forecast.

Washington’s hot economy continues to pump black ink into the pens of state budget writers, with new projections of collecting roughly $860 million more in existing taxes pouring in through 2021.

Announced Wednesday, the news did not dampen Democrats’ calls for new taxes, which they call necessary to properly fund a new two-year state budget.

Republicans cheered the new revenue forecast — and quickly argued that Democrats can fund a budget without tax hikes. Some called for tax cuts.

The ST also reports that one revenue option proposed by the governor, the capital gains tax, may have difficulty getting traction in the Senate. Washington Policy Center analysts Jason Mercier reviews, again, why he believes the capital gains tax is an income tax and therefore off limits to state lawmakers.

More later. The House and Senate budgets are likely to be released next week.