Nearly one-in-four private sector jobs held in February have been lost in the pandemic. That’s how we read this analysis by the Washington Research Council.

Initial claims for unemployment insurance (UI) increased to 496,718 in last week’s report (covering the week of April 19–25). This was the first week in which people who are not typically eligible for UI (like independent contractors) were able to apply for benefits, pursuant to federal COVID-19 relief bills. But initial UI claims under the regular state program increased too. Continuing claims were 959,190—more than double the number in the week before. Total claims reached 1,455,908.

The Tax Foundation has been tracking national claims.

Approximately 12.9 percent of the U.S. civilian labor force has now applied for or is receiving unemployment compensation benefits (through April 25, the latest data). The previous high was 7.9 percent early in 1975 during a recession, with a Great Recession peak of 4.8 percent between February and April 2009. Entering March 2020, unemployment claims as a percentage of the civilian labor force stood at 1.4 percent.

According to TF, Washington now ranks 9th in UI claims as a share of the civilian workforce, at 18.6 percent.

Crucially, a solvency level of 1 indicates the ability to pay out claims for one year during a Great Recession-like event, and as of April 25, nearly 21.3 million people had filed for unemployment, 418 percent of the worst Great Recession level. A level of 1 now suggests the ability to pay out current claims for only a little under 13 weeks—and of course, states have already started paying out these new claims. Our map above draws from the most recent fund financial data and claims figures, taking into account payments already made, to project how many weeks each state’s fund has left. 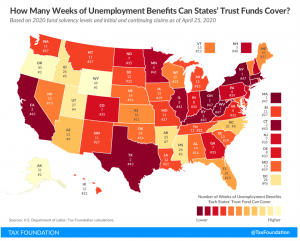 California, which ranked No. 50, with a scanty solvency rate of o.21, became the first state to borrow from the federal government to make unemployment payments. The Wall Street Journal reports,

The Golden State borrowed $348 million in federal funds after receiving approval to tap up to $10 billion for this purpose through the end of July, a Treasury Department spokesman said Monday.

The U.S. government also has approved loans of up to $12.6 billion for Illinois and up to $1.1 billion for Connecticut through the end of July to replenish state unemployment-insurance funds, though the two states hadn’t yet started borrowing by the end of April. California was the only state to have accessed the program so far in the current downturn, the Treasury spokesman said.

Another TF map presents estimates of the number of weeks states’ trust funds can cover. California is shown has ranking No. 43, able to cover just 2 weeks. Washington ranked No. 27, able to cover 11 weeks. 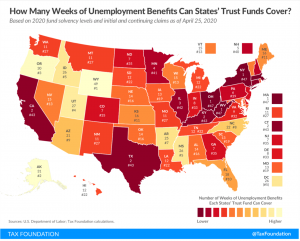 Hard times, for sure. It will be good when people are able get back to work safely.