The budget lawmakers adopted just weeks ago won’t make it through the coming biennium. That’s the inevitable conclusion to draw from the Washington Research Council’s new policy brief.  Even before the pandemic, we and others were worried about the sustainability of the major spending increases in this biennium. But now, the unexpected economic shock of the pandemic has put the revenue assumptions upon which the budget is based into the waste bin.

This chart from the brief underscores the magnitude of recent budget growth. 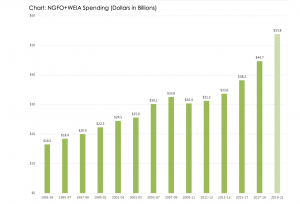 Acknowledging the quickly worsening public health and economic circumstances in the last few weeks of session, the Legislature passed a 2020 supplemental operating budget that appropriates less than either of the earlier Senate-passed or House-passed proposals.

Still, it increases appropriations from funds subject to the outlook plus the workforce education investment account (NGFO+WEIA) by $975.8 million. Revised biennial appropriations are $53.849 billion—an increase of 20.5 percent over 2017–19. Overall, the appropriations are focused on human services and housing and homelessness programs.

The budget balances over four years, leaving an unusually high unrestricted NGFO ending balance in 2021–23 of $843 million. Notably, the Legislature also passed a bill this session that strengthens the balanced budget requirement.

With the economic outlook continually worsening, the spending level in the budget is unsustainable. It is almost certain that the budget is based on revenues that will not be collected.

There’s no word yet on when lawmakers will meet to make the necessary adjustments, but a special session later this year is widely expected.