A new policy brief from the Washington Research succinctly examines the state’s budget outlook, which is much better than most expected a year ago. Here’s the “briefly” from the report:

The state budget situation looked dire last summer. Since then, both the revenue and spending sides of the balance sheet have improved. Revenues in 2019–21 are expected to be 10.7% higher than in 2017–19 (following several biennia of extraordinary revenue growth).

Enacted 2019–21 appropriations from funds subject to the outlook are 20.2% higher than 2017–19. But the cost of continuing current services in 2019–21 is expected to decrease (due to lower caseloads), and Gov. Inslee took several actions last year to reduce state spending. Additionally, the state has received billions of dollars in federal aid. Some of this can be used in place of state funding, and some is for new spending needs related to the pandemic.

Given the state’s current position, new taxes would be for new spending. The Legislature should be cautious about increasing the tax burden, particularly in a time of significant economic uncertainty.

In a nutshell, that’s it: The budget balances, there’s no shortfall, any new taxes would be to support new spending, and there’s an ample cushion in budget reserves. (See some earlier posts on the subject here, here, and here.) But the WRC doesn’t stop there. The brief takes a look at revenues and expenditures since the last recession, reporting that both grew at an extraordinary pace, as shown in the two charts below. 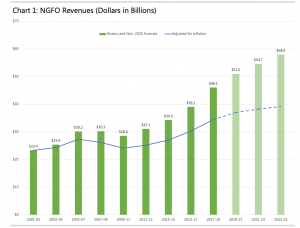 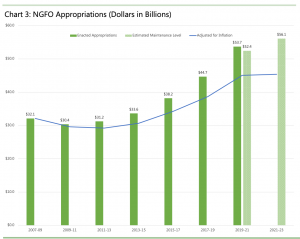 As the brief reports, Washington’s tax structure has performed well.

According to Pew, Washington’s tax revenue growth from the pre -Great Recession peak through 2019 was the fourth highest in the nation (behind North Dakota, Oregon, and California) (Pew 2020).

You’d think this excellent news would be welcomed by lawmakers, who have no budget crisis to address. Yet, the tax talk continues. The WRC concludes:

Despite all this good fortune, many new taxes have already been proposed by Gov. Inslee and the Legislature.

Whatever the faults of Washington’s current tax structure, it has enabled the substantial revenue growth that Washington has experienced in recent years—growth that is forecast to continue still. Given the significant economic uncertainty that still exists and the improving revenue outlook, the Legislature should be cautious about increasing the tax burden.

As the research establishes, new taxes would be for new spending, about which lawmakers should also be cautious. We recommend reading the WRC brief and sharing it widely.