The report explains an apparent inconsistency in Washington employment/unemployment numbers.

Washington’s unemployment rate held steady at 5.8% in May. The rate is up 0.2 percentage points since May 2015 unlike the U.S. unemployment rate, which has continued to decline (see figure). This is in spite of significantly stronger employment growth in Washington. The exp 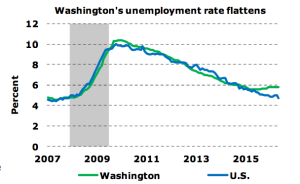 The National Federation of Independent Business (NFIB) said that sentiment among small business owners edged slightly higher in June. The Small Business Optimism Index increased from 93.8 in May to 94.5 in June, its highest level since December. It marked some continued improvement from March’s two-year low in optimism, even as small firms continue to be concerned about the overall economic outlook.

In all, a good month.