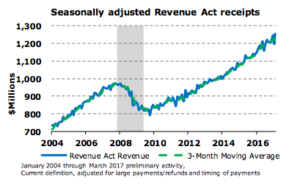 The state’s strong economy continues to beat official expectations. According to the latest report from the state Economic and Revenue Forecast Council (from which the above graph was taken),

Last month, revenues came in slightly below forecast, however, the report noted the strength of the economy. The trend seems solid. And, as we wrote yesterday, Washington’s best-in-the-nation 2016 GDP growth is not a fluke. The state economy, led by the metropolitan Puget Sound region’s vibrant tech sector, is poised for sustained growth. The ERFC commented on the GDP report.

The 3.7% growth rate in Washington real GDP in 2016 was the largest among the states and District of Columbia and was significantly higher than the 1.5% growth rate for the U.S. as a whole. This was the fifth consecutive year Washington GDP growth has exceeded the national average after lagging in 2009, 2010, and 2011.