This chart shows something that looks very much like a V-shaped recovery for tax collections, which we hasten to point out is not the same thing as an economic recovery. 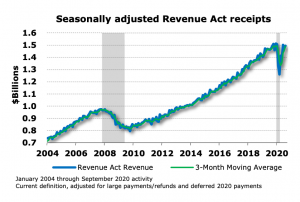 Collections are now nearly at the pre-COVID trend.

The ERFC comments on the state economy.

Washington’s unemployment rate declined to 6.0% in October from a revised 8.3% in September. The October rate is down significantly from the 16.3% rate reached in April which was an all-time high in the series that dates back to 1976.

Much more at the link. Coupled with the Washington Research Council’s assessment of the caseload forecast, this is very good news for state budget writers.