The latest unemployment data from the state employment security department. finds only two counties with unemployment rates above 8.0 percent. 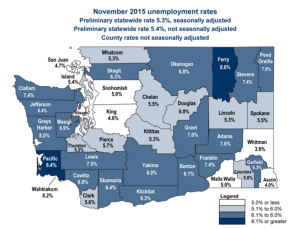 For many, though, it’s still a tough economy, as the Daily World reports.

The small growth in Grays Harbor County was enough to end the county’s two-month streak below 8 percent. Pacific County had held a rate below 8 percent for four months prior to November.

The data also puts Pacific County in the No. 2 slot for statewide unemployment, coming in behind Ferry County’s 8.6 percent. Grays Harbor tied with Yakima County for the fourth-highest rate.

The ESD provides a useful comparative table. The November statewide unemployment rate of 5.3 percent is slightly above he revised October rate. And the metropolitan Puget Sound unemployment rate climbed from 3.8 percent to 4.2 percent. 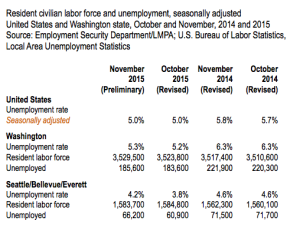 Although Seattle and King County have enjoyed what economists would consider full employment for some time, much of rural Washington faced a very grim march out of the Great Recession.

This has eased considerably this year. In November all of the state’s counties have unemployment rates in the single-digits.

He notes the ongoing struggles of rural counties and concludes.

So the Two Washingtons persist, even if the weaker part is doing better at least on paper.

Opportunity Washington: Priorities for Shared Prosperity is a roadmap for expanding Washington’s culture of opportunity to individuals, families, employers, and communities in every corner of the state. The county unemployment reports demonstrate the ongoing importance of focusing on our three priorities: Achieve (education), Connect (transportation), and Employ (economic vitality).